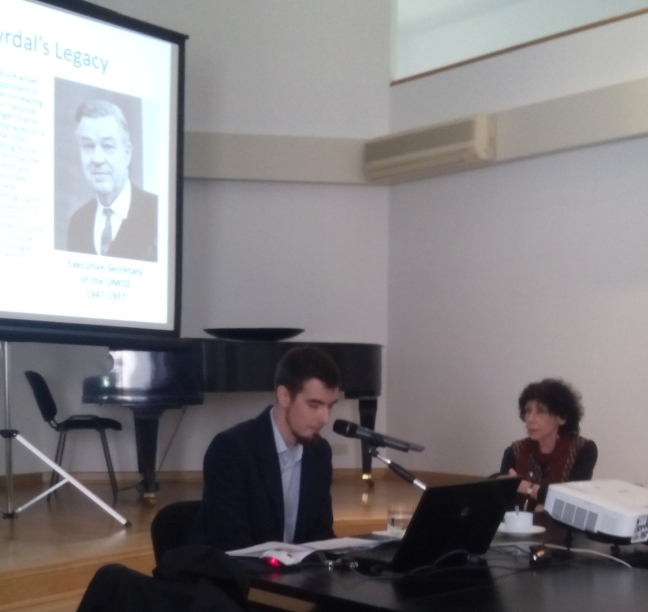 The presentation explores the main features of cooperation between economic experts during the pre-CSCE (Conference on Security and Co-operation in Europe) era (1947-1975) under the aegis of the most comprehensive all-European organization of the period, the United Nations Economic Commission for Europe (UNECE). At scientific and policy levels, contacts and exchanges between socialist and capitalist economic experts were circumscribed by common priorities and challenges faced by the UNECE staff and governments from both sides of the Iron Curtain. END_OF_DOCUMENT_TOKEN_TO_BE_REPLACED

Colloquium “In from the Cold: Eastern Europe, Sub-Saharan Africa and Cultural Diplomacy during the Cold War”, Bucharest, June 17, 2016.

In 1955, the Afro-Asian Conference held at Bandung, Indonesia, was a historical marker. Representatives of newly independent states came together to discuss the fate of African and Asian nations in face of the superpower’s political ambitions over the “Third World.” The “Bandung spirit” would epitomize the commitment to anti-colonialism and neutralism during the Cold War. In 1961, the Belgrade Summit crystallized this state of affairs as it advocated an eminently independent path for the “Third World”: the Non-Aligned Movement (NAM). This shift from neutralism to non-alignment co-existed with important historical events, such as the Sino-Soviet split and the Sino-Indian conflict. In the early 1960s, as the “Second world” of socialist countries was strongly divided and the decolonization process in Africa took off, new ideological and political fronts were opened in the global Cold War.  Africa became an important battleground on which a myriad of political projects were confronted and played out, from anti-colonialism and socialist solidarity to “third worldism”, non-alignment or Pan-africanism. In this context, cultural diplomacy became an important strategy for building cultural ties and fostering forms of political identification among different, sometimes estranged, actors. END_OF_DOCUMENT_TOKEN_TO_BE_REPLACED