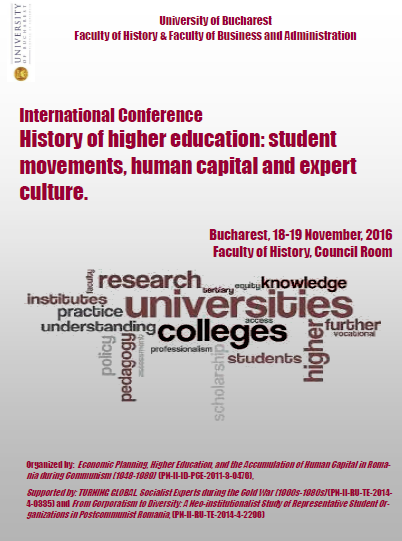 This conference was organized in partnership with our project.

The second half of the 20thcentury was a period of significant expansion of secondary and tertiary education throughout the world. The number of students grew exponentially, the institutional landscape of higher education diversified, the share of university graduates on the labor market became more pronounced than ever before, and their impact on the overall economic performance of various societies also increased. Europe played a significant part in this global success story. On both sides of the Iron Curtain, there was a strong relationship between the dynamics of economic development and the expansion of higher education. Nevertheless, systemic framework conditions mattered. In socialist command-systems higher education was part of centralized planning and, in principle, it was shaped to fit the requirements of the economy. In the more liberal systems prevailing in Western Europe, the connection between higher education and the requirements of the economy was less one-sided, as the universities had more say in the configuration of professionalization patterns. The aim of the conference is to provide a fresh look on the complex relationship between the contribution of higher education to the human capital formation and the functioning of professional structures in various social systems across Europe since the end of World War II.

The conference is linked to the research project Economic Planning, Higher Education, and the Accumulation of Human Capital in Romania during Communism (1948-1989) financed by the National Research Council (ID_PN-II-ID-PCE-2011-3-0476), in cooperation with the project TURNING GLOBAL. Socialist Experts during the Cold War (1960s-1980s) financed by the National Research Council (ID_PN-II-RU-TE-2014-4-0335).

The main topics on which we expect contributions are:

Any other topic considered appropriate will be welcomed. Presentations based on a comparative approach are encouraged. We are very much interested in analyses focusing on national and/or local case-studies. We also wish to signal out entanglements between East and West in the field of higher education:  linkages, crossovers, and mutual influences in terms of institutional frameworks, professionalization patterns, expert knowledge, and mobility.

The submission of paper proposal will consist of filling in a proposal form and sending it with a short CV attached (no more than one page) to epherom@gmail.com